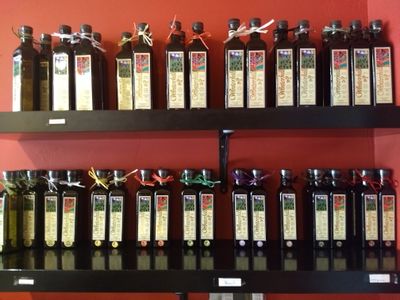 • Olives mechanically extracted without chemicals or excessive heat
• Less than .5% free oleic acid
• Positive taste elements and no taste defects, as determined during a blind tasting

At Winterhill, we believe there is no finer gift than one that comes from the heart. When you purchase our olive oil, you are giving a gift to our talented developmentally disabled artists. At the same time you are buying one of the best substances for your own heart health. Winterhil Olive Oil is a gift from the heart for the heart.

There is a strong and growing trend in the gourmet foods area. In the recent years, top quality, gourmet, artisanally produced, extra virgin olive oil has become very popular. This popularity is partly due to health conscious consumers using olive oil in place of butter and other saturated fats. With increased interest in healthy eating, there has been a consistent flow of research pointing to the health benefits of olive oil.

Olive Oil and Cancer - The high concentration of monounsaturated fats, which make olive oil beneficial in the prevention of heart disease, also has a positive impact on the prevention of breast cancer. Confirming prior studies indicating that the incidence of breast cancer among women who consumed olive oil was lower than that among women who did not, a recent study showed that olive oil consumption could reduce the risk of cancer by up to 45 percent. The study, conducted over a six-year period, included 61,000 women between the ages of 40 and 76. The study also cautioned that vegetable oils could significantly increase the risk of breast cancer.

Several studies have shown that women who eat a Mediterranean diet high in olive oil have lower breast cancer risk.  Whether this protective effect is due to oleic acid, the main monosaturated acid in olive oil, or some other component of the diet has been a longstanding question.Dr Javier Menendez, of Northwestern University in Chicago along with other investigators now think they have the answer.  They completed a study of this problem which was published in the January 2005 issue of Annals of Oncology.  They found that oleic acid suppressed the cancer causing gene in breast cells grown in cell culture.  When oleic acid was combined with Herceptin, an anticancer antibody drug made by Roche pharmaceuticals which can kill breast cancer cells, the effect was synergistic and led to death of cancer cells.  The good news is that this is the first molecular proof that the Mediterranean diet can affect cancer cells.  Also, olive oil is known to be safe, cheap and readily available. Caution should be given that this is a study of cancer cells grown outside the body and no study has actually been done on breast cancer patients. Hopefully this discovery will lead to future epidemiological studies and perhaps dietary counseling for those with breast cancer.

Other Health Benefits - Olive oil aids in healthy bone mineralization, important for childhood growth and for the prevention of calcium loss in the aging. Olive oil can also be beneficial to liver function.

Winterhill, part of a trend - As was the case in the California burgeoning wine industry in the 70's, we are seeing boutique labels appearing in gourmet olive oil. It wasn't long ago that the French were turning up their noses at California wine. Now, they're clamoring to see just how Californians are managing to produce such high-quality wine products. The same might be said for California olive oils. Although the history of olive oil production in California has been relatively brief, skilled growers are already producing oils that rival those of Europe. Today, in the Mediterranean-like climate of Northern California, there's a bona-fide olive oil renaissance going on, with steady growth in the variety, quality and quantity of premium olive oils. There are over 150 artisanal producers in California - up from fewer than 15 a decade ago - bottle estate oils with prices ranging from $18 to $50 for 250ml to 750ml bottles.

Winterhill is a member of the California Olive Oil Council and its oil has been Certified Extra Virgin. Winterhill extra virgin olive oils can be purchased in 8.45 fl.oz. (250ml) 16.9 fl.oz. (500ml) and in larger bulk bottle sizes.